What blue hair has taught me about confidence.

I have a confession

My white/grey/silver hair is not natural. It is completely artificial by my bestie and hairdresser Cameron. I wrote the full story some time ago, and you can catch it here.

This year, putting together Launching into Leadership and my other online programs involved months of filming my white face and white hair against a white wall. All this had me pining for a change. I tried those flash virtual backgrounds with limited success - the artificial intelligence couldn’t tell the difference between me and the wall. 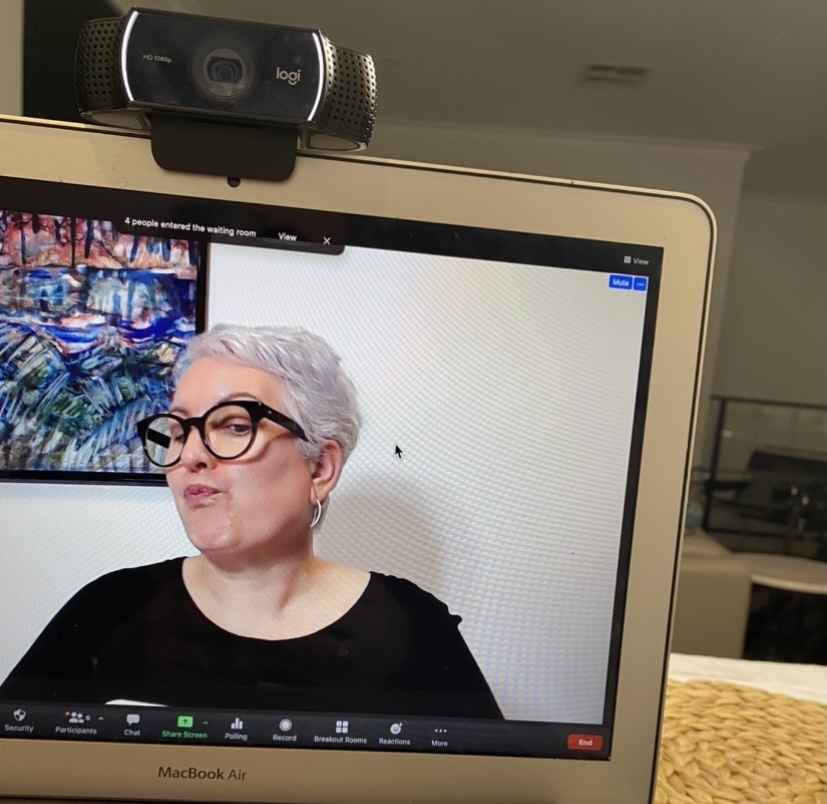 Recently, I suggested to Cam that I save the planet from another bucket of bleach and chemicals and see what happened if I went natural….ish.

As we know, change isn’t hard, but transition sucks.

This transition may take a couple of months.

Throw in: An eye of newt, the toe of frog and some mysterious black conditioner and…..

Not blue-grey as anticipated. But blue-green.

Some days it is Rottnest sea-blue others it’s a bit more Maldives.

4 weeks later, there is an inch of dark regrowth, which has the crown of my head looking like a litmus paper test for pond algae.

Suffice to say, it was not the look I am after. Like many women, at least 30% of my identity is tied to good hair. Geez, it may even be part of my professional brand.

At first, blue hair was fun, and then I noticed other people’s reactions.

God bless Mary, who said straight out, I don’t like the colour it makes your hair look dirty.

Then there were the subtle sideways glances followed by a tentative … your hair is blue?

Most people didn’t mention it …. But I know they noticed.

What has all this got to do with confidence??? and it’s not what you think.

Yes, it takes a certain level of chutzpah to wander around with bad blue hair, but that's not it.

Having blue hair has reminded me of fail fast and fail often, a concept that I teach as part of my confidence work. This comes from the work of Kay and Shipman, The Confidence Code and their finding that one of the reasons women lack confidence in their relationship to failure, stuffing up and making mistakes.

Boys are encouraged to take physical risks and play competitive sport for longer, where they learn to lose, they learn to make mistakes. They learn that failure isn’t fatal. Just take a look at YouTube; it is full of videos of boys celebrating coming off their bikes and skateboards in their effort to be faster, higher better. On the other hand, girls quickly learn that their positive reinforcement comes from doing things right, from perfection. Girls videos are all about the perfect makeup, perfect hair, perfectly organised pantries, perfect lives. Heck, Pinterest and Instagram is cocaine for perfectionists. Girls are socialised not to put anything out into the world until it is beyond criticism.

Perfectionism can actually make failure feel worse. If you have worked long and hard on a project until it was perfect when you finally submit it, and it is critiqued or ignored, it can feel devastating.  This "rejection" makes us less likely to risk and more likely to turn to perfectionism. Our thoughts become: I must try harder, do better, make everything exemplary.

Confidence what turns our thoughts into action.

Therefore, perfection is the enemy of confidence. It slows us down and keeps us small.

Share your projects at the first draft stage - something Brené Brown calls shitty first draft or SFD. Have a go, take a risk. Notice that nothing catastrophic happens if and when things aren’t as they should be. Manage those uncomfortable emotions.

Confidence is knowing that sometimes you will make the wrong choice or decision, which is ok if it leads to learning.

“The courage to be vulnerable is not about winning or losing. It’s about the courage to show up when you can’t predict or control the outcome.” — Brene Brown

Has there been any negative impact on my world (or the world )? Absolutely not?

What has made me realise is that I have taken lots of actions in my life that required courage (and vulnerability). It is not only the quick wins, but the quick fails that have built my confidence.

What stands in the way of confidence are those uncomfortable emotions. The more practice we have at managing those, the more confident we become.